English Oak And The Tower Of London Drawbridge 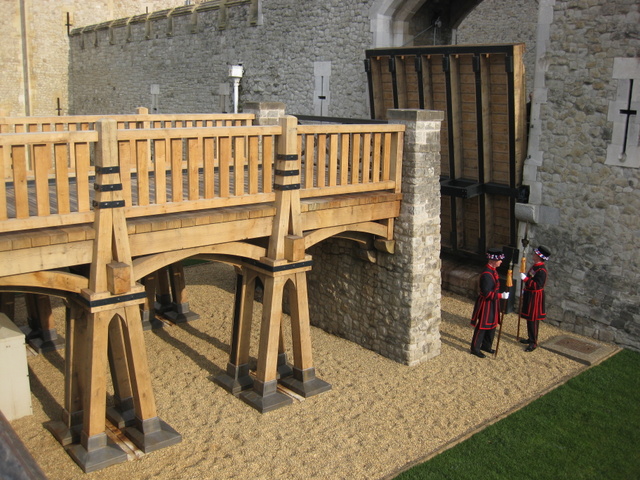 Tom Barnes of Vastern Timber looks at the construction of a replacement drawbridge at the Tower of London and discusses the technical issues surrounding the use of oak on prestigious heritage projects.

Originally constructed in 1834 to allow munitions to be transported into the iconic and world famous White Tower, the drawbridge at the Tower of London was completely replaced in 1915. The drawbridge remained fully functional until 1978 when the rising element was removed to leave only a permanently fixed structure.

Historic Royal Palaces and English Heritage engaged GMT Timber Frames of Shepton Montagu, Somerset, to deliver an entire replacement structure that would include full drawbridge functionality, stipulating the use of ‘green’ (wet) oak for construction throughout.

This project proved a challenge for GMT Timber Frames, as co-founder Geoff Foers explains, “Normally, when working on large projects we would do the majority of the cutting work at our yard in Somerset, transport the timber to site and assemble it. However, this project was complicated by the fact that the new drawbridge needed to be sturdy enough to accommodate a fully laden fire engine in case of emergency. Consequently a steel frame had been installed. Our challenge was to cut, assemble, and ‘clad’ around this steel frame, and then construct the rest of the drawbridge, while at the same time accurately replicating the look of the old bridge.

“The only way we could do this was by setting up a temporary workshop in the dry moat (the moat having been drained back in 1834) and working from there for the six weeks of the project. This allowed our team of four to accurately cut the timbers on site and fit them piece-by-piece.

“We cut the individual parts needed to clad the steelwork, and then built up a green oak structure to carry the bridge deck, handrails and other elements.

“While the brief stipulated European oak, we took the decision to use English oak, which we prefer as it has more character and seemed more apt for this very prestigious project.”

Typically, oak used for heritage or conservation projects such as the Tower of London drawbridge will need to be certified to FSC or PEFC standards to ensure sustainability. However, after that, the choice of whether to use English or European oak will usually be voluntary. The choice of which to use can be influenced by both aesthetic and technical differences in the wood. There will also be choices to be made regarding grading, cuts, and even from which part of the tree the timber comes, so getting the balance right will rely on a complete understanding of the various options and influencing factors.

The overarching choice facing specifiers is whether to choose dry oak or fresh sawn wet oak, commonly known as ‘green’ oak, or dry oak. Oak beams are usually cut from trees between 90 and 120 years old, ideally felled during the winter when the sap is down. Because of the price differential and the fact that it is much easier to work with, green oak is the ideal way to use the timber. The alternative, dry oak, is very hard and therefore much more difficult to work, and will be between two and four times as expensive.

Oak dries very slowly (a large beam can take 8 – 10 years to fully dry) and is consequently expensive if large sections at low moisture contents are required. There are four options when specifying or purchasing oak, and the choice will have a dramatic impact on the price:

While green oak was the logical choice for the Tower of London drawbridge, other projects may require the use of dried oak. For example, a recent restoration project at Hampton Court Palace tennis courts used air-dried oak beams as it was a restoration challenge where rotten wood was removed and new pieces were spliced in. Elsewhere within the grounds of the Tower of London, an external staircase and repairs to the iconic raven cages were constructed out of joinery quality air-dried English oak, chosen for its stability and quality.

Anecdotally, many people regard English oak to be the stronger option because the wood is coarser and features a more interlocking grain. This comes as a result of small knots and clusters of knots within British trees that are not grown as straight or as cleanly as French or German trees. The closeness of the grain around these knots gives the timber more strength as well as a more interesting aesthetic. By comparison, with French and German oak the grain typically runs in a very straight line, which is excellent for joinery, but the wood is ‘mellow’ and without the interlocking grain. Another benefit of the coarser wood found in English oak trees is that it does provide more resistance to worm attack, which is endemic in oak logs from the continent.

In the UK, structural oak (beams) are graded to the British standard BS5756. For large sections (20,000mm square +) the grades are THB (lower grade) and THA (higher grade). For smaller sections the grades are TH2 (lower grade) and TH1 (higher grade). The higher grades will be stronger than the lower grade, allowing for the use of smaller sections while maintaining their performance. In order of strength these are THA, THB, TH1, TH2. There is also an overarching grading standard (BS 5268) that covers all timber species and that allows for comparison between species. The grades that relate to this standard are C and D grades, ie. C24 and D30.

Grading of oak beams relates to the knot content, quality and dispersion of knots (where they lay in the wood), whether they are ‘sound knots’ or ‘dead knots’. Sound knots are clean knots. However, if a branch has been damaged (or even targeted by a woodpecker), fungus can get in and rot away the knot. In the worst case that can turn into a hole that results in an undesirable brown streak of rot running down through the tree, rendering it virtually useless.

The direction of the grain is also a consideration, if a tree is nice and straight, so the grain is likely to be as well. If the tree is bent or twisted the grain can present a structural problem when cutting a straight beam. However, this also presents another benefit of English oak, which due to the fragmented and open woodland it often grows in, can often be misshapen.

When manufacturing curved oak beams it is necessary to use a curved log. When cutting curves from a straight log the grain will inevitably run off the arc of the final cut. Drying cracks will run along the grain and therefore across the face of the curve, with the likelihood of the curve snapping. With English oak it is common practice to store curved logs for just this purpose, upon which a curve template can be laid for cutting. The grain of the wood will follow the curve of the template and the produced piece will have much greater inherent strength.

This leads on to the issue of where exactly the timber is cut from the tree. Beams cut from the core (heart) of the tree will be stronger as the grain is more compact. When a sawmill addresses a newly felled tree, full-length logs are cut from a butt end at the bottom of the trunk, typically 2.5m to 4.0m, depending on where the first bough usually appears. This butt end is generally clean and free of knots and will be planked and dried to produce joinery quality wood. As knots start to appear the sawmill will take out the middle of the tree up until the point where knots become problematic, and that is generally where beam quality wood is cut from. The very top of the tree, with lots of knots, becomes the lower quality wood, often cut for products such as landscaping sleepers

For the Tower of London drawbridge larger timber sections were cut with a ‘boxed heart’, meaning the heart of the tree runs through the length of the beam. This cutting technique produces a very strong and normally straight beam. Other cutting techniques include half-cut, where the heart runs down one face of the beam, or quarter cut, where four beams are cut out of the log leaving the heart behind. Alternatively smaller pieces are often cut away from the heart or in sawmilling parlance ‘off the heart’.

When specifying oak for conservation and heritage projects there is clearly a lot to consider and a lot of options available. As one of the most iconic of species, oak will continue to be central to many such projects. That English oak is readily available and offers both aesthetic and structural advantages is something that should be celebrated and taken advantage of.

For more information about the grading oak oak beams visit either TRADA or CATG. Both organisations are very helpful.

As seen in the Building Conservation Journal