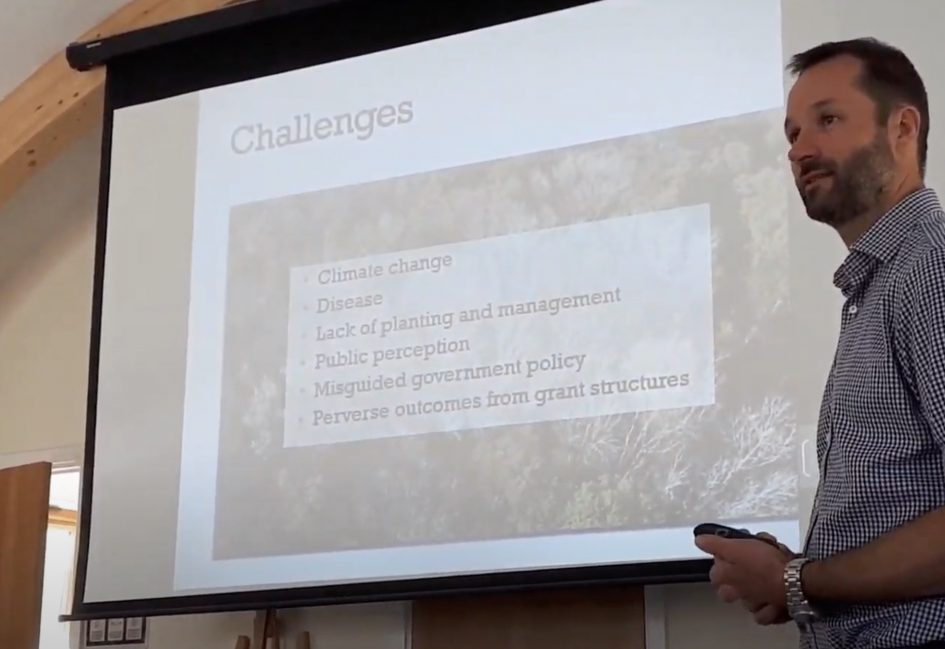 Last week I was invited to talk to summer school students at the Sylva Wood Centre. I was asked to talk to them about challenges and opportunities for British grown timber.

This is what I told them:

You’ll notice I’ve changed the subject to “British Timber, an emotional roller coaster” and that’s kind of how I feel about it. I’ve been asked to talk about the the opportunities and threats and trying to balance those two in my own head sometimes feels quite emotional, so I’m trying to share some of that emotion with you.

I am the managing director of Vastern Timber,  which is my family business. I’m fourth generation and we’re 120 years old. What we have always done, and what we still do now, is we take British trees, and we sawmill them. So we take a whole tree and we cut it up into pieces and we try and find markets for that wood. Now it would have been a whole lot easier from a long time ago to get rid of the sawmill and just import wood.

It’s a lot harder to bring the trees in – two years beforehand – cut them up, dry them, try not to mess it up, kiln them, put them in shape but that’s what we do.

And it’s fun! It’s much more fun than bringing a pack of wood in.

Now we we want to plant all of these trees to try and combat climate change, but there is a good chance that climate change is going to beat us. It’s going to encourage pests and just the few degrees increase in heat could kill everything that we plant.

It’s depressing. You can sugarcoat this stuff but we all have to be aware that we are in the thick of a serious problem here, with diseases like ash dieback. Our second biggest specie, ash, is dying around us.

I watched very early in my career all the elm die. And now it’s happening with ash.  Oak is really really struggling. It’s depressing. And in society, people have this monopoly view of protecting woodland which always means you must leave it all standing, and you must just ‘hug’ it.

The Forestry Commission does surveys, and more and more people say you should just let nature take its course and nature will do its thing, well it doesn’t work like that! And so then you’ve got no wood to build your building you have to end up using concrete and steel and plastic.

What excites me the most there’s a massive opportunity for wood. A massive opportunity –  some of the predicted figures these aren’t good, they’re kind of scary. We’re talking about being carbon neutral by 2050. By then the global GDP is set to grow by about 130 percent.

The building stock will double, they’re reckoning, by 2060. So let’s start thinking about what are we going to make these buildings out of?

We need buildings, everyone wants a home, people need places to work. We’ve got to build them out of something. You can be as environmentally minded as you want but everyone wants a building to be in.

There’s also the health benefits of wood. It has been recorded that children learn better when they’re in natural surroundings, people recover better – so that’s why hospitals now use more wood, and biophilic design. Lots of natural materials around you makes you perform better

You know, if concrete was a country,  it would be the third biggest emitter of carbon.

So selling wood, is kind of easy.

It looks quite complicated but this is actually a life cycle analysis, an environmental product declaration we did for our Brimstone product. 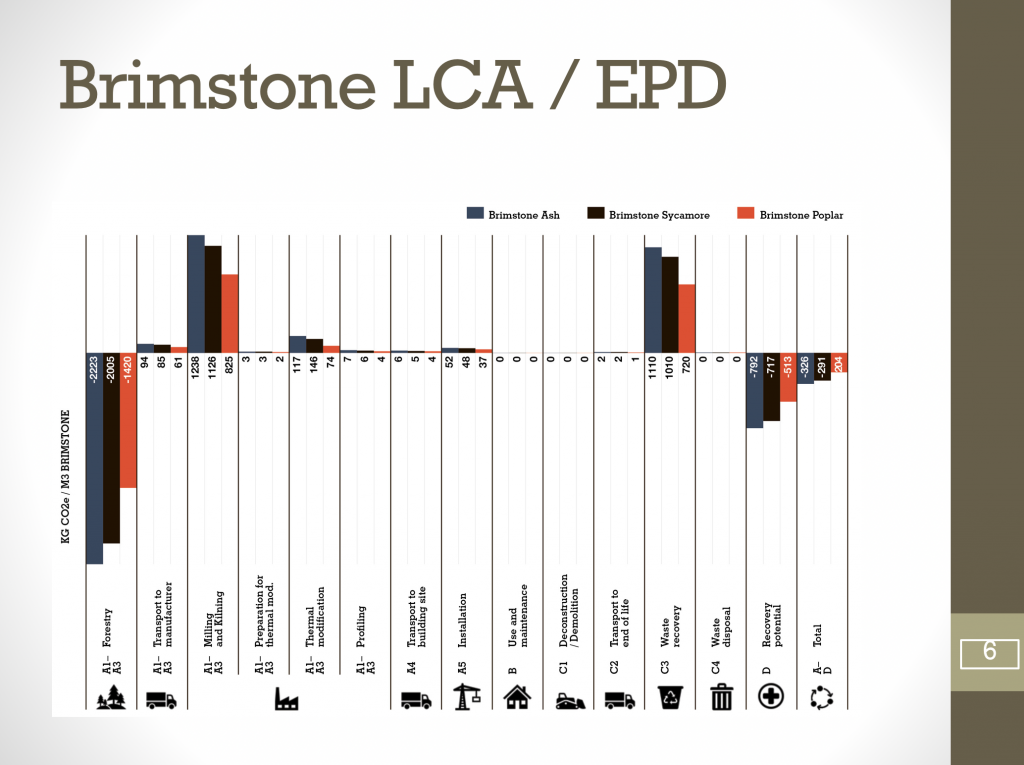 This LCA actually maps out all the impacts – so the top one is bad, the bottom ones are good.  First you’ve got the sequestration by the tree, and then all of the emissions from actually doing stuff to the wood, and then at the end there’s theoretical benefit if you were to burn that wood at the end of its life, instead of burning gas or oil (but that’s very theoretical).

It’s about understanding what the impact of your product is, and then telling the story.

What’s really struck me recently is how much people start talking about supply chain because they can’t get stuff. Stuff like toilet rolls, and fruit in the supermarket and all the stuff that people expect to have available.We’re having a massive shortage of wood in this country as well. It’s drying up and in many cases it has dried up, so people are now becoming aware of the supply chain.

Clients are starting to ask me where it’s come from, but also to to comment that they didn’t know beforehand that what they were buying has come from so far.

Clearly, we can’t we can’t clearly replace all of that £7.5 billion of timber the UK imports. But we can replace some of it and people are asking the questions so it’s shaking people out of their status quo.

They’ve got to go looking for something else so they start asking the questions, and that’s the first step to get people to change.

So we’ve got a massive opportunity and it won’t be here forever because the market will sort itself out. But we have an opportunity to actually push our stuff in front of people and also people I think intrinsically now understand that trying to keep things local is just a sensible thing to do.

If you can get something from a farm down the road it’s just better than bringing it from New Zealand. You don’t need the science,  you don’t need data to tell you that, it’s common sense.

People, I think, mainly want to do good so if you can tell them the story, and persuade them that what they’re doing by buying a piece of British timber, as opposed to a piece of imported timber is doing good – however you want to frame that – they will understand, and it’s an emotional thing that will get people to change their behaviour.We have a massive opportunity and we have massive problems.

What we can do is just fix our sights on the way forward, and use the power of our questions and stories to try and change people’s perceptions. 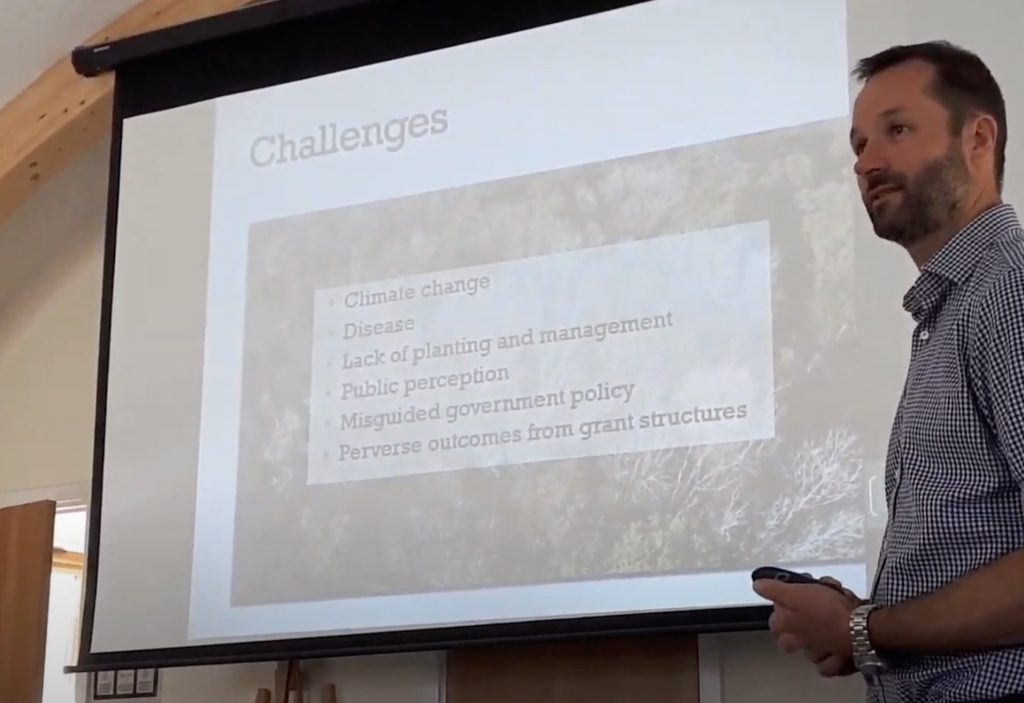